On Beans on Toast’s Wikipedia page, it candidly and somewhat aggressively states, “he sings about sex, drugs and politics”. His latest album “Fishing For A Thank You” departs from this rock and roll checklist in a distinctly more woolly fashion. He is sickeningly loved up.

‘Microwave Popcorn’ is an ode to simple pleasure, warm cosiness and everything that makes happiness unbearable from an outside perspective. Lyrically, it drags elements of John Cooper Clarke’s kitchen sink poetry into a big soup of movie night schmaltz. It’s lovely, in small doses. See also ‘Papa Jay’, but substitute romantic contentment for the joy of being a father. It’s nice, but it feels unnervingly like you’ve gate crashed a family photo album.

As an entity, ‘Beans on Toast’ is perhaps best summed up as a rough-hewn amalgamation of Franks Turner and Sidebottom. The former Frank has been cited as influence enough for it to go without saying that there are vocal and folky similarities. The tragically less ubiquitous also Sidebottom echoes – whether consciously or not – through ‘Fishing For A Compliment’. The papier-mâché headed comic of ‘Radio Timperley’ fame was a master of the charmingly everyday observations Beans scatters so skilfully through the album. Case in point is “Angry Birds”, a song about marital responsibility through the medium of an Angry Birds addiction. 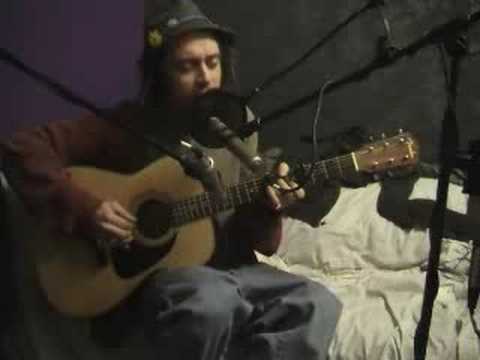 Worry not, Beans on Toast has not completely eschewed the political rage and ‘gone soft’. ‘Life’ takes a piano ditty shaped detour along the path of punch the air, Carpe the Diem tinged self-help. It’s all in the “life is for living, the beauty of nature, live every day as your last” vein, but Jay McAllister’s whiskey and cigarette sodden vocals bring it back from the brink of weepy saccharine. The only insult you could throw at ‘Fishing For A Thank You is that it’s a bit too smugly optimistic, but that would just make you the bad guy.

When people got angry at Frank Turner for being a little bit fiscally conservative, and felt cheated that he isn’t actually this generation’s Billy Bragg, Beans on Toast would have been the perfect antidote. His anger is bitingly self-aware though. There’s one track which appears to be a medley of The Guardian’s greatest hits. He calls it ‘Protest Song’, and sings about how writing a protest song will help renew his subscription to The Man. It’s dizzyingly sarcastic.

‘Fishing For a Thank You’ is packed with sharp social commentary, but unlike the blurry fury of pseudo-socialist students, it’s clever, thought-provoking, and with a heck of a lot more LOLs. It almost makes the backing music redundant.