When bands first hit the higher level of recognition and semi-stardom, they often clam up and shoe-gaze their ways through gigs. I’ve seen it a few times and it can kill a performance. Luckily, Chvrches remained comfortable and chatty in front of a packed Manchester Ritz. The place was already rammed when Thumpers took the stage and the spare space was steadily soaked up by the latecomers.

Thumpers are a refreshing musical duo (supported by a revolving cast of friends), with an impressive range of talents between them. It’s always nice to see a trumpet pulled out from a synth based group. More exciting is the moment you notice all members have microphones and the harmonies begin to flow. Their foot-tapper of an upcoming single, ‘Sound of Screams’ was the pinnacle of their set; I wouldn’t be surprised if they made quite a few sales off the back of that performance.

Despite her small stature, Lauren Mayberry holds the stage well. Although she claimed to be struggling with a cold, her voice powered through the waves of keys and drum patters, only falling below the tides on the occasional verse.

At their best, Chvrches combine the drama of the 1980s power ballads and the surreal touches of the Knife’s electronica. Their formula alters little throughout their set (reserved verses feature limited synths, before piling on more for the chorus as Mayberry’s voice washes over you) but there are enough hooks and quirks to draw the audience in. A large percentage of the fans were joining chorus after chorus and it’s clear that the band are efficient in converting potential followers. Amongst the tunes I found myself humming after the show were ‘We Sink’ and ‘Lies’, two gloriously catchy pieces of song-craft. 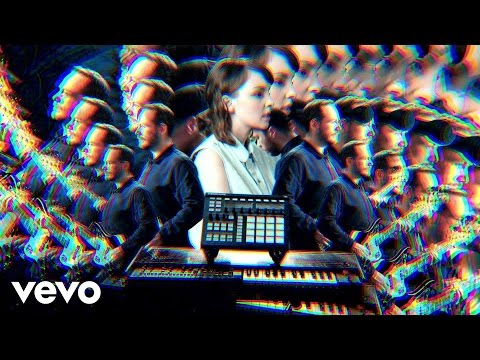 Part of the appeal of the band’s set can be put down to the immersive lighting accompaniment. Varied programmes fire off from behind the band, concocting a recipe for euphoria. It’s easy to rue the brief lapses in this showmanship between songs, but easier to forgive them, thanks to Mayberry’s charm and inter-song banter.

The set ended with both a cover of Whitney Houston’s ‘It’s Not Right, But It’s OK’ and fan favourite, ‘The Mother We Share’. Although well performed the Houston cover never really connected, however, their recently re-issued single hit was a fantastic closer, leaving the audience with a last taste of euphoria.

With personality, hooks and a cracking stage show, it will be interesting to see how Chvrches build on a formula that is currently working well for them.