Reviews are supposed to be unbiased, right? Well-written reviews anyway. I don’t think any of mine have ever been either of those things. Ho hum. Usually I’ll get an email saying “Hey Luke, can you review [band I either don’t like or don’t know] on [day when I’m probably working at my real job] at [venue with the really arrogant bar staff]?”

Of course I always agree – which is why I ended up hating my life at The Horrors’ gig the other month (I still want my 2 hours back).

This time though, I’d already bought tickets to see Daniel Johnston, and when Scenewipe caught wind of this they asked me to sum up my night in roughly 400 words. So I think the main point I’m trying to make here is that I like Daniel Johnston and if you think at any point this review is biased then you’re probably right. So shut up.

So when I bought tickets this show was advertised as being at Manchester Cathedral – which I thought would be fantastic; a venue that performer and crowd alike could really become engrossed with and forget about the outside world for a few hours – but then it got changed to bloody Sound Control and I found it quite difficult to imagine such a pseudo-religious experience could take place in the same airspace where they used to sell average drum kits and sub-par PA systems.

From what I’ve read in the past, Daniel Johnston’s shows can go either way at any moment – so I was a little apprehensive when he walked onstage, picked up an unplugged guitar and started strumming with no real purpose.

“Can someone plug me in?”

Thankfully somebody did, and off he went – silencing the crowd with three fragile and scarily intimate songs, playing with his trademark nervous urgency before exiting the stage declaring he’d be back with the band. Leaving Daniel with a Microphone and a song book, the band in question – The Earlies – really showed off the songs in their full capacity. Much like Johnston’s previous collaboration with The Beam Orchestra – this was a chance for some of his older songs to find new life and expand. 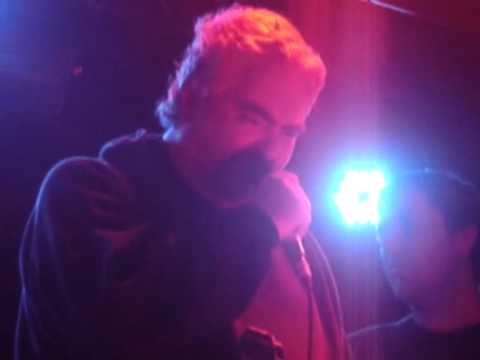 The stage dynamic was awkward to say the least – an aging, fragile Johnston physically shaking as he wailed through songs of love and heartbreak whilst treating his backing band as complete strangers (at one point completely forgetting their name). I suppose that’s Daniel Johnston though; an artist completely absorbed in the moment – singing what he wants, when he wants. Made evident with an impossibly long version of ‘Rock This Town’ and an impossibly short version of ‘True Love Will Find You In The End’ both renditions leaving The Earlies looking at each other with expressions that made it painfully obvious they were – for want of a better phrase – completely winging it. Don’t get me wrong – it was incredible to witness, and hear. If anything the jittery tension made it ‘an authentic Daniel Johnston experience’ if you will.

This hour-long-two-encore-will-he-do-a-third-encore-nobody-really-knows set almost certainly wasn’t the defining gig of anyone’s life, and it was nothing close to being an outsider artist religious experience that the setting of a Cathedral may have provided, but I’m pretty sure that doesn’t matter when you’re watching somebody bear their soul through a series of great songs, and to hell with what I said about being biased – Daniel Johnston believes he’s one of the best songwriters in the world, so maybe you should too.

For more Daniel Johnston, visit this!