The queue outside Manchester’s Sound Control is a testament to Fucked Up’s reach and appeal.

Smart-Clothes-Shirt-Man, Punky-Tatooed-Pierced-Lady, Checked-Shirt-Mesh-Cap-Boy and Kitchy-Twee-Owl-Necklace-Girl are all there; chatting, giggling and vibrating with excited at the thought of spending their Halloween eve with their favourite Toronto hardcore punk band!

We get our stamps and trot upstairs to the immaculate venue, where we buy pints of Diamond Lager and hurry to the front row to catch probably the best band in Leeds, in fact, probably one of the best new bands in the country, Eagulls.

As their contribution to the All Hallows theme, the young men of Eagulls have dressed up in some trashy, Nancy Spungen-esque feminine attire, and they don’t look half bad.

They smash through a set of catchy, anthemic hardcore that rips a smile across your face. Tracks like ‘Council Flat Blues’ and the infectious ‘Possessed’, featured on their recent 7” split with MAZES, score threw the room with a thick, angular force that brings nothing but joy. Just from looking at Eagulls on stage, you know they are more real than any band around at the moment. Like a band of brothers, there’s a connection onstage achieved without communication of any kind, there’s something almost intimiating about it, like a psyco in a fist fight, you know they’re gonna go all the way without a care for anyone.

After another delicious Diamond Lager we make our way to the front for the guaranteed spectacle of Fucked Up. The band arrive on stage and begin to chug out lead singer Damian Abraham’s entrance music, and sure enough, the cuddly fan favourite emerges from the wings to rapturous applause.

“WE’RE FUCKED UP FROM TORONTO CANADA, THANKS FOR COMING OUT”

How humble these words sound, how much love there is in this room, we all feel amazing and show it through our pogoing bodies and silly faces.

As the beat drops on the first track of the set, out of nowhere, punks of all shapes and sizes over run the front of the audience, drinks are blasted from hands, men and women alike are cast aside by ripped and patched denim whirlwinds, leaving a moat of understanding between the ‘hardcore’ hardcore at the front, and the people who want to stand and witness the mayhem sipping diamond lagers and singing along. 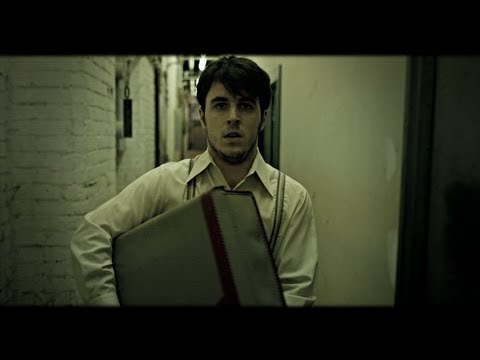 Track upon track from their three stunning records blast out into the heavily populated room, electrified by the tireless devotion of Mr. Abraham, sprawling out over the front row of the crowd, offering the mic to the many willing vocalists crammed against the railings, clawing lovingly at his bulky, topless body. Abraham’s love is guzzled up and sent back at him ten fold as he roars his infectious melodies into the throng.

As the night draws to a close, Abraham’s recruits entrants to an impromptu ‘Best Costume competition which features an array of brilliant outfits, from a little Spiderman to a horrifically accurate Pulp Fiction gimp. The gimp deservedly wins, and the atmosphere in the room is one of festival joy as Fucked Up storm on with their final numbers, reveling in the family vibe they have created.

The lights go up and Abraham takes to the floor to hug and chat to his fans. I approach the great man and have a raspberry blown on my belly. The cherry on a dizzying, sweaty cake of a night.

Whether you’re a hardcore punk lover or not, it’s impossible not to be drawn into the celbration of life that is the Fucked Up live show.

One Response to Fucked Up