Ashley Eriksson has a nice voice. When she starts her set acapella, the dreamy quality of her singing brings the crowd to a relaxed quiet, but when she picks up a bass guitar the illusion of a calm confidence melts away and becomes a woman guessing her way through her own songs on unfamiliar instruments. First, the bass, then a synthesizer that she has no idea how to operate (to the point of giving up half way through a song). Finally – in desperation – she invites Phil Elverum up on stage to guess his way through an unrehearsed track or two on some drum pads. The whole thing smacks of unapologetic self-awareness.
Almost as if it didn’t matter that she was bad because the audience would see her performance as flawed, yet endearing or something. I’m not fooled by it. It was embarrassing.

It turns out that for this particular tour, Ashley Eriksson makes up one fifth of Mount Eerie. Along with Elverum, she (and two bassists named Juice and Julia) create a subdued, low frequency, rumbling sonic bed for Elverum to pierce through with his distinct voice. It’s a performance full of oxymoron – it’s powerfully gentle, hideously beautiful, intensely calming and confidently awkward. Sounds piled on top of sounds laden in reverb and fuzz and feedback and just when you feel like you could get lost in it all, it stops abruptly. The crowd stunned to silence so intensely that at one point in the show there’s a painful twenty or thirty second gap in which the band says nothing, the audience say nothing and nobody quite knows whether to clap or wait for something to happen. 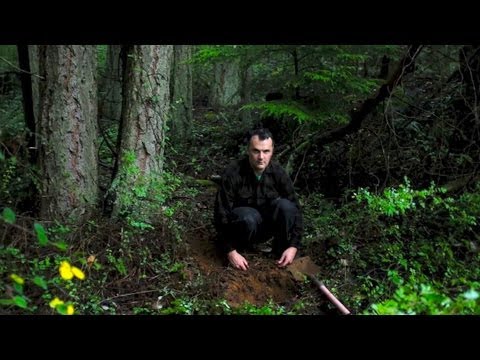 I first happened upon Mount Eerie when I was reviewing Earth at the Ruby Lounge about a year ago – he played on his own and completely took me in. I haven’t re-read the review that I wrote at the time, but I imagine I gushed naively about how brilliant he was. Even though Mount Eerie as a performance was sonically richer this time around and still sounding incredible, I failed to be quite as enveloped in the performance, but I get the feeling that maybe that was that fault of his band. Each of the members had their own project and each project came with a certain degree of humble bragging and thinly veiled smugness.

I think my problem with the show was this; Phil Elverum is a songwriter with a neurotic and awkward stage presence that hasn’t been crafted or thought about. It’s a genuine representation of him and when he started playing as The Microphones almost 20 years ago it wasn’t the kind of thing musicians used as an affectation. Sadly, in a modern, post-ironic music culture the younger members of his band fail to see that and almost make the whole thing seem disingenuous, and the younger members of the crowd can’t separate the two, so they buy into it and then we have a music scene of copycats and constructed personas which some talented people with limited confidence accidentally started with the purest intentions of playing some songs.