Go back two years or so ago to Dot to Dot Festival in Manchester Academy and I had my face blown off. Not literally, but in the “Oh my God this band is sickeningly awesome” way. Yes, TEMBD are THE balls. Back then, I didn’t know much about them and I certainly did not expect such an intense, odd and exhilarating performance that entailed the Daddy of Cool; Guy McKnight (Lead Singer) to pounce off stage mid song and yell “Do you suffer from mental?!” at me. It was…mental. The lyrics didn’t make sense and how did he know I was a bit mental. I instantly adored them.

I was sad when they split in 2011 but I had hope they would return as I noticed a recent Nike advert had used their song “Chicken” as its soundtrack. My relentless praying to the music Gods at the holy font of rock had worked…they are back in Manchester and best of all, I’m hopefully going to meet them. Play it cool Vicky. Play…it…cool.

The venue was rammed and when a white faced Guy McKnight ran on stage after being twenty minutes late, the riled up chants of “Brightonian wa*kers!!” and “We’re going home! We’re going home!” transformed into an ear piercing roar of cheers. Seconds later, he dives on to everyone and impressively manages to “back swim” through the sea of hands. His frequent, seemingly random pointing and staring at audience members was reminiscent of Ron Mael (out of the band Sparks). He proceeded to take his shoe off and roar “Who wants my shoe!? Who wants my f*cking shoe!?” to which a crowd member actually made a swift shoe exchanging. Colourful flashing lights, complimented Guys eccentric stage presence and his incredible full blown, loud, beautiful screaming rock vocals can easily convert any rock hater to fall in love with them. They provide an oddly provocative, untamed, raw and spiritual theatrical performance covering well known songs including “Celebrate your Mother and “Chicken”. 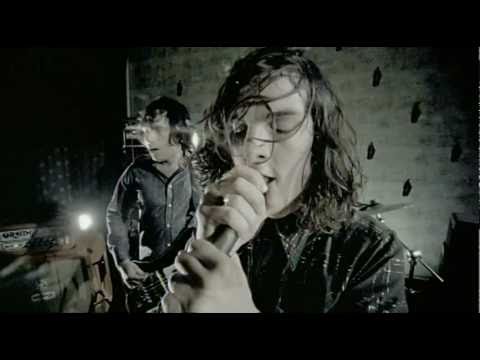 After completely brown nosing the promotions manager I manage to wing a small meeting with the band. The audience slowly vamoose and I am taken to the edge of the stage and a hand reaches out to help me up. Noel Fieldings hand I must add, that I held onto probably a bit too longer than normal. I enter a smoked filled room where there’s the odd recognisable TV face dotted around as well as: Hula Hoops, cans of Red Bull , half eaten sandwiches on paper plates and a fridge full of…oh…salad. I’m taken to a sofa and the band seem to be on a level between hyper and tiredness. I’m offered by Fielding to share a packet of Beef Hula Hoops…Not my favourite flavour but to be honest it is Noel Fielding here.

Why did they split and where the hell did the band name come from? I corner Mr Mcknight and nervously try find out…

So where does the band name come from?

Andy (Lead Guitarist) “A long time ago! We were children. At that time, it seemed there

were a lot of bands with one word names: Blur, Oasis, Coldplay”.

Andy: “We just wanted something different”.

Guy: “We were rebels without a cause”.

Do you still have the car? (In their first years they were renowned for having a black car with red and orange flames on each side).

Guy: “We didn’t buy it, we didn’t sell it, its independent of the band now; it’s sat in a car park where homeless people live in it”.

Andy: “When we first started off our old manager said we were shit”.

Guy: “We would go to award shows and paps would be like “Who the hell are these guys?”

Andy: “When we got bigger our manager asked us what we wanted and we all said a car ‘cos none of us could drive then”.

The door swings open and the support act “Zulu” pick up their things and loiter in the corridor saying their goodbyes as Sym (Bass player) walks back in and sits bang in front of me.

What is the song Mr Mental about?

Sym: “Dunno, the guy that wrote it has left”.

Reporter, Presenter and Musician John Robb then walks in and shakes Guy’s hand and they have a brief discussion about Glastonbury and Joy Division.

Guy: “Sorry…Sorry about that. Yeah the song was about George W Bush the Second”.

Why did you break up?

Marc (Rhytmn Guitar) comes and perches on the sofa and I can’t help but notice his large colourful tattoo of the words “Celebrate your Mother” on his upper arm.

Marc: “We didn’t break up, we capsized and disintegrated, people left and we were running on two wheels”.

Guy: “I feel we all have a lot to offer and to not do it again at this point would be a great waste. You know when you’re on stage it feels warm like you’re crawling into a nice warm bed”.

Guy: “You know, if you’re not happy you’ve got to change. We reformed because undeniably there’s something between us that’s going on. You have to find your path and way of life. I wanted to become happy”.

What or who influenced you?

Sym: “The Clash, his son is over there!” He points at a member of the band Zulu’s bass player, Louis Simonon (son of ex Clash Paul). “Phil Collins’ son is in that band too! Erm…The band that influenced me… The Farm”. I don’t know if to believe him; there’s a slight trail of sarcasm in the air as they all chuckle.

Guy: “The Doors, The Stooges, we’re influenced by each other, we learn from each other’s strengths”.

Marc: “Ha ha! We’re taking the piss with that one! But seriously I’m influenced by Andy”.

Are there any artists you like but too ashamed to publicly admit?

Andy: “No. You shouldn’t be ashamed of who you like. I like these guys!” (Points at Zulu).

Guy:” I’m not ashamed of anyone I like, shame is a mental disorder, a waste of time”.

What’s the worst job you’ve ever had?

Marc: “I don’t believe in reincarnation”.

What do you usually have for breakfast?

Marc: “A good cereal with slices of banana or a fry up”.

If you were an ice-cream flavour what would it be?

Guy: “Not necessarily the place but…we just really appreciate when people turn up; from one man and his dog in Dundee, which did actually happen once to a huge Roman Theatre in the South of France”.

Did you enjoy playing in Paris last night?

Guy: “Yeah it was amazing. It has a lot to offer; I ended up in two films last time we went”.

Guy: “Yeah! Well, the first was a short and the other I did last year was a feature called “La Succession Starkov” directed by F.J Ossang”.

Guy: “I had lead a role in both and it’s just about this man who er…” He trails off as more people enter the room.

Oh. So what do you think of programmes like The X-Factor? Is it not better to have some form of music based prime time TV programme than nothing at all?

Marc: “Personally I don’t think it encourages people, it’s a false idea. It makes and kills dreams, it falters in many ways, but it’s not unreal…I mean people aren’t miming or anything but”…Sym puts his coat on and tells Marc that they have to go as they’re doing a DJ set at Big Hands.

Guy: “I don’t endure the celebrity culture. The programme is an unfair representation of people whether they have talent or not…the judges aren’t fit to judge anyone; its entertainment but not art”.

I get a quick photo with them and thankyou’s are exchanged and as I leave I am dragged back in to meet a blonde haired man sat on another sofa with a brunette beauty.

Random man: “Lizard in a Bottle”.

Me: “Are you all winding me up again”?

I leave to find Sym outside and he asks where he can get some cigarettes. I tell him there’s a Spar down the road to which he replies “What, an actual Spa”? I get home to see if Lizard in a Bottle does actually exist and feeling like a total royal goof to find that they do.