Versions is a live album by Zola Jesus, featuring string arrangements by JG Thirlwell performed with the Mivos Quartet, recorded at the Guggenheim Museum, New York. The tracklist is a compilation selected from Zola Jesus’ previous 2 albums, Conatus and Stridulum II, with one exception; the centrepiece ‘Fall Back’. Stridulum II being one of my favourite ever albums, I could hardly muster the dexterity to rip the cellophane off of the download link. If anything inside were to be half as great as that, I’d be a happy guy.

First is ‘Avalanche’. The strings sing and your skin prickles. If there is a song on the album to bring tears to your eyes, it is this one. The arrangement is beautiful and gives and extra dimension to the studio version. Instead, the missing electronic production sounds wistful and Autumnal, as opposed to feeling like you are crammed into a gloomy basement in the 80s. Zola’s voice is far gentler than I remember; I could hardly recognise her as the singer. 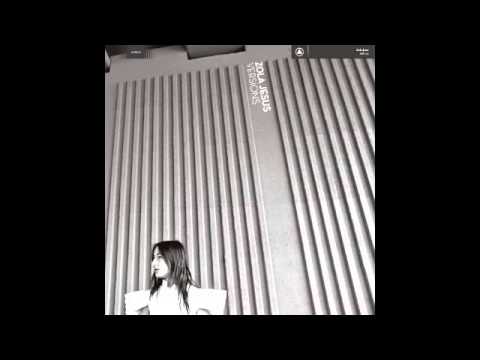 Next is the brand new ‘Fall Back’; a gorgeous masterpiece. A quick search across hipster music sites will tell you that the number of orgasms people have had since hearing this song in the past few days is countless (I’m on my third today). The intro is heartbreakingly haunting. The cello does not let you forget that the song will drop and Zola’s voice will transcend into the hook “I would do anything to be the one with you!”. Her voice snaps back to how I remember it on Stridulum II’s ‘Light Stick’, her distinctive throaty howl. The bass drums driving right through your chest until it all crescendos leaving the violins to attack and complement each other into a squealing fade out. If this is anything to go by on future material, I’m gagging to hear it. Sadly, there is nothing quite as special as this for the rest of the album, but I’m retching in excitement to hear the next studio effort.

The cello provides a relentless stabbing bed for ‘Hikokomori’ whilst the violins and vocals battle it out. The production on the live version trumps the studio one as the vocals are not lost behind a fog of reverb, therefore not relying on the drum beat to make you keep on coming back. ‘Run Me Out’ contends with ‘Avalanche’ for the most wonderful string arrangement. Zola Jesus once again displays her powerful voice as she fights the quartet for superiority. Once the toms start up, she belts out the chorus, it is a sudden leap from one level to the next until the song closes.

The album takes a dramatic step down with ‘Seekir’, my least-favourite song off Conatus, and least favourite here on Versions. They hadn’t managed to improve on the studio version, and this ends up sounding like The Corrs fought their way into the Guggenheim to be the backing band. ‘Sea Talk’ salvages this. The strings give the song a lighter tone which is a better reflection of how I feel when I listen to the song. The original has been stuck in my head ever since I first heard it. I’d like to say this is close behind ‘Fall Back’, however, a single niggle is a duff note in the second-to-last bar which sticks out like a hernia. This is otherwise a terrific version.

‘Night’ is far more melancholy than the original, for as long as the intro. It all goes to pot for me as it becomes comparable with the X-Factor violin version of ‘Kashmir’ by Led Zeppelin. The strings don’t bring more integrity, but less. In my embarrassment, I scrabble for the ‘next’ button, but solace is not found on ‘In Your Nature’. If you wanted to find out what it would be like if Zola Jesus collaborated with if Benny and Björn, you’ve found it. The vocals are yet again incredible, but wasted on this slip-up.

‘Collapse’ saves the day, closing the album, as on Conatus. It is perfect for greasing the tear ducts yet again. By the time she sings the final note, you feel breathless as if she had been stood on your chest for the length of the album. This was an excellent choice to transform with a string quartet.

I’ve learned from Versions that Zola Jesus has written songs that will stay with me forever, and is continuing to do so, ‘Fall Back’ is by far the best song on the album, closely followed by ‘Collapse’ and ‘Sea Talk’. I also learned that some of her songs needn’t have had string arrangements made for them. The livelier songs from the studio, do not work for me this way. I will listen to this album many times over, but I can’t help but skipping over ‘Seekir’, ‘Night’ and ‘In Your Nature’. It would be an absolute privilege to see her live, either with the Mivos Quartet, or with her usual moody synths, synonymous with ‘Zola Jesus’.