I have wanted to tick Misty’s Big Adventure off my list for some time. My life has been peppered with encounters with Misty fans – those who have ‘experienced’ (I do not us the word lightly) the shows from the Birmingham eight-piece. On one hand, their unique appeal is easy to articulate – they are a tight collection of trained musicians, performing entertaining and well-conceived songs, with the idiosyncratic accompaniment of a dancing red man covered in blue hands called Erotic Volvo. On the other hand, this doesn’t really tell half the story – the real pleasure comes from far more subtle engagements with the audience.

But first a quick word on the support: I didn’t have a chance to learn the names of the two bands – the posters just stated ‘+ guests’, I can’t find them online, and if they announced themselves, I didn’t hear it. Though a pole apart from Misty’s, they were at least within the same hemisphere as each other. Heavy, pulsing guitars, simple slammed drum patterns and screeching inaudible vocals united them, but the first band boasted a fourth member that stood in majesty over a vast array of effect units, apparently pre mixing and distorting everyone else’s instruments before they made it to the sound desk. Though I didn’t hear a single word of vocals, some of the tracks had an impressive command over the tunnel-ish space at the Star and Garter. They were at the their best when the guitars were angular and disjointed. Though I’m happy to hear walls of noise, the effects guy could perhaps of benefitted from a headphone output mix to check up against. Lacking such addenda, the second band just plain weren’t as interesting. When there’s just three of you on stage, you need some sort of approach – screaming your words just isn’t enough for me.

The audience fleshed out considerably for Misty’s, thankfully, though it was still slight enough to remind me that you can be in a band for the best part of 20 years, have celebrity support, major support slots, several releases, and still have to fight for live audiences. It was the perfect mix however – die hard, long time supporters, those who have had their interest piqued (like me), and the chancer drop-ins who haven’t a clue what they’re letting themselves in for. But very quickly, everyone is a convert. If it’s not at the beginning of the second song, when the aforementioned Erotic Volvo bounds onstage to give the performance a special dimension, then it’s when ringleader Grandmaster Gareth (a name awarded with a considerable – yet intelligently unacknowledged – nod to irony) says ‘I’ll just wait’ over some chatter between two songs. It’s delivered with such affability that you can’t help but abide his implied command. To be honest, if you’re not enjoying the gig by now (and you’d need a heart of silicon not to), then there’s not much more these guys could do to bring you round. 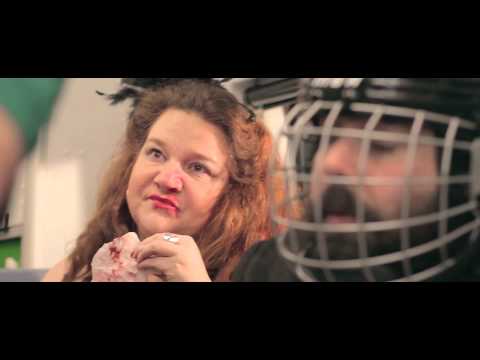 Usually I take notes through gigs but I was nervous about both missing a good moment and giving the impression to anyone onstage that I wasn’t enjoying it, so the pen stayed in my pocket. As such I’m a little hazy on song names and order. But it was a long set that appeared to encompass old and new, calm and wild, outwardly comedic and subtly cheeky. Also impressive was the fluidity of movement onstage. The Star and Garter isn’t overly generous in that field but the band managed several exchanges of rolls (including a highly impressive female trio Puppini Sister-esque lead from the girls in the band, who normally played the trumpet, saxophones, and keys), as well as a one-man dance routine for most songs – his commitment to the proceedings can be measured against the amount of blue make up that sweats off his face over the course of the gig.

But it is Gareth Jones – known ‘in-house’ as Grandmaster Gareth – who has the primary responsibility for administering heart and soul. As lead singer and nominally the songwriter too (though credit must go to the entire band for how integrated every instrument is into the delivery) he had the audience warmly clasped in his metaphorical bosom, keeping everyone neatly both on edge and on tenterhooks. He also showed what you could achieve in economy of words, especially in newer songs. Whilst I wholeheartedly agree with the sentiments of their song ‘Fashion Parade’, it’s verbose compared to another song about the relationship between Britain’s current coalition partners, the lyrics to which go, in entirety “I want a biscuit/ You can’t have one.” The set was filled with several vignettes like this; moments that by a lesser band may have felt contrived but here, were joyful. In the future, whenever I travel to another town or city, I will make a point of finding out whether Misty’s Big Adventure will coincide with my visit. One can always make time for an hour of unbridled fun.